又名: 果盜 /  AKA: Obst-Spion
能夠取得最多最美味的水果，才算是最佳特工！看招！接招！
Only the player who can obtain the yummiest fruit will be considered as the best fruit spy!
3–5 Players / 15–20 min Playing Time / Age: 8+
Hong Kong multi-language version – Chinese/English/German Fancying themselves spies like those in the movies, a group of little animal rascals have decided to sneak into Farmer Papa’s neighboring orchard to gather gardening intelligence (i.e., fruit) they can use on their own farm. Competing with both open and hidden information, they must identify bluffing and beware of the others’ weapons. The player who can obtain the most yummiest fruit will be recognized as the best fruit spy!
In Fruit Spy, six farmhouse boards are arranged in a circle in a random order, with 2-4 fruit tokens (valued 1-7) placed randomly upon them. Two stand-up figures — Farmer Papa and Daly — are placed on their respective starting farmhouses.
Each player has eight spy cards in hand — trick cards valued 1-7 and one tool card — and on a player’s turn, they place one card face down on a farmhouse of their choice. If another face-down card is already there, the player turns it face up; if the revealed card is a tool card, then both the new card and the tool card are discarded. When cards are played on the farmhouse where one (or both) of the figures stands, that figure is moved — clockwise for Daly, counterclockwise for Farmer Papa. The game ends when one of the figures reaches its starting farmhouse or when all players have played all of their cards.
Fruit tokens are then awarded in order of the players’ total strength on each farmhouse: the strongest player takes the fruit token with the highest Yum-yum value, the second-strongest player takes the next highest-valued token, and so on. Any remaining fruit tokens go to the strongest player. Daly is scored as a fruit token of value 10 while Farmer Papa kicks everyone out of the farmhouse where he stands at the end of the game empty-handed. The player with the highest Yum-yum value total wins!
3–5 Players / 15–20 min Playing Time / Age: 8+
Hong Kong multi-language version – Chinese/English/German 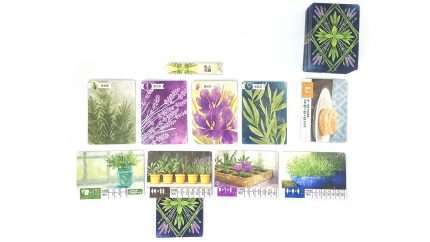